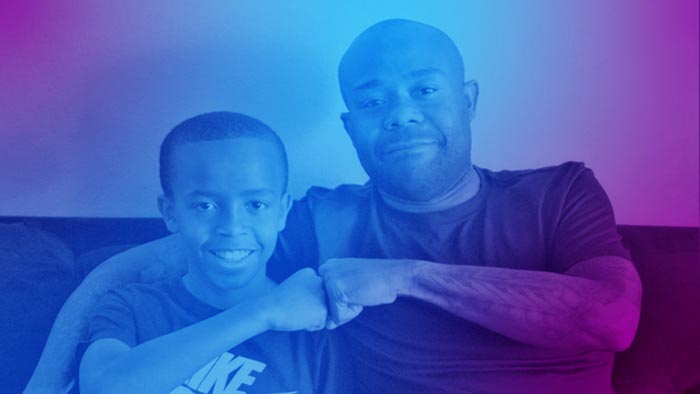 We have to give a HUGE Keys & Kingdoms shout out to seventh-grader Shyon Clark of Victorville, Calif who recently performed the popular single, “Deliver Me,” for his Dad, because the 12-year-old was so touched by the song’s lyrics.

During the performance, which the family recorded and shared on social media, the seventh-grader broke down in tears. Shyon told “Good “Morning America” that his tearful reaction was because he was relieved his dad was home and healthy.

Inspired by his dad, who grew up playing music, Shyon started playing the piano at just 4 years old, with dreams of one day becoming a famous musician.

Throughout the pandemic, the father-son duo spent nearly four hours each day practicing together and playing hits from popular gospel artists such as Kirk Franklin and Erica Campbell. Often times, making music served as a form of therapy and as a way for Shyon to express his emotions.

In early September, Johnnie Clark was rushed to the hospital with a serious infection. For nearly a week, he fought for his life at a California medical center, saying his motivation to keep fighting was Shyon and his four other children.

“Shyon called me every day, so that pushed me to better myself and get back to my family,” he said. “I knew that I had to return home and show him that I was going to be OK. He was my motivation.”

Although Shyon was concerned for his Dad, he said he always stayed hopeful and played his organ each day as a reminder of their treasured time together.

“It made me extremely sad because I couldn’t see him and we weren’t able to be together. But I continued to play the organ he bought me by myself because I didn’t want to forget the songs he taught me,” Shyon said. Now, Clark and Shyon are back to playing the organ each day at home.

The father-son duo have continued their music lessons, often sharing Shyon’s performances on social media. They’ve also begun writing original songs together to inspire others during the pandemic.

Music does that. It heals, it brings us together and it’s INCREDIBLE for kids.  That’s why we’re so glad to bring real piano skills to kids through Keys & Kingdoms.  Because everyone should have access to the power of music in their lives.